On January 15th, 2008, Steve Jobs pulled a MacBook Air out of a manila envelope and changed laptop computers forever. Blink and you might have missed it: the instant when an entire industry shifted to accommodate a new breed of device that made more sense to more people. And last month, Apple had the audacity to do it again.

It took 12 years and 10 months, but Apple finally has a new “game-changer.” Not an incremental update. Not a computer for fanboys. But a true game-changer that will force the industry to re-configure yet again.

The Apple Silicon Macs are a new breed of device. Because while ARM-based computers are not new; highly functional, blazing-fast, ultra-efficient ARM-based computers were a pipe dream until about a month ago. If ARM-based Windows machines represent the first slow, plodding steps of a mutant fish on land, Apple has created a full-blown land mammal.

That’s what it feels like using the first Apple Silicon MacBook Pro.

Apple released three Apple Silicon Macs last month, all of them featuring the Apple M1 SOC at their core. There’s the M1 MacBook Air that is now completely fanless, the M1 MacBook Pro which boasts a reported 20 hours of battery life in Apple’s metrics, and the M1 Mac Mini, the one computer out of this trio that doesn’t have to concern itself with battery life.

The review unit we received is the fully upgraded M1 MacBook Pro:

That extra 1TB of hard drive space adds a lot to the price. If I were recommending a configuration for photographers, I’d tell you to get this same computer with only 1TB of built-in storage instead of 2, which brings the total price down to $1,900. 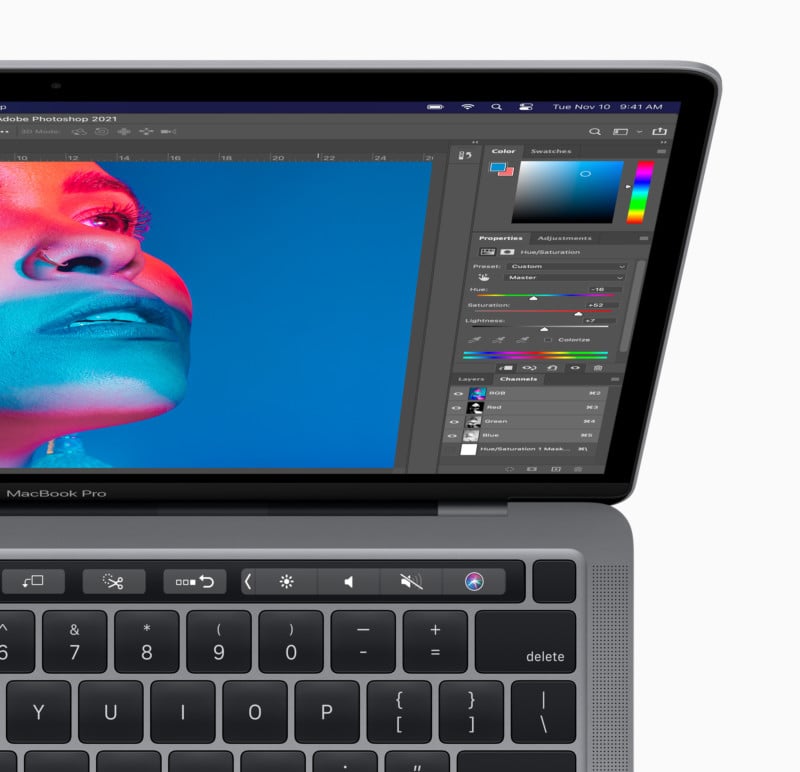 On the Outside – Nothing’s Changed

The only thing setting these two computers apart on the outside is the Thunderbolt 3 ports: the top-end Intel Macs still come with 4 ports, while the new Apple Silicon Macs feature only two1. This might be a deal-breaker for some, but if it is, all you have to do is wait. More ports are almost certainly coming to future iterations of the M(x) processor as Apple Silicon is developed further.

Beyond the lack of ports, the computer is identical to its predecessor. The new “Magic” keyboard is among the best on the market, the touchpad is still the most responsive you’ll find on a laptop, and the display is bright and color accurate. Based on our measurements using a DataColor Spyder X Elite, you can expect 100% coverage of the Display P3 gamut and 89% coverage of AdobeRGB. 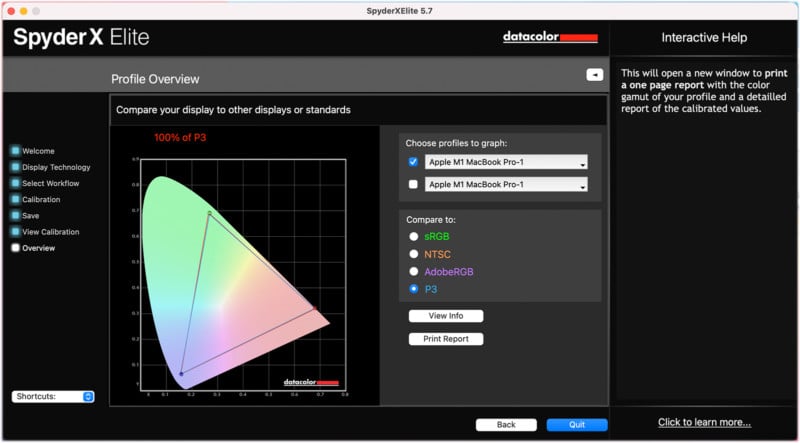 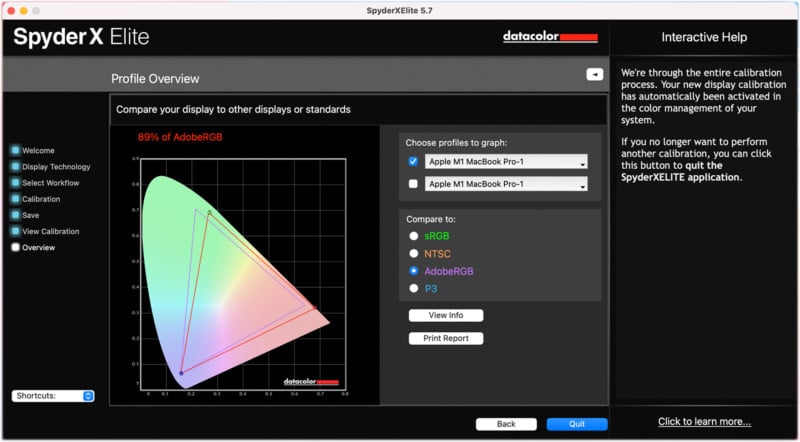 In summary: on the outside, it’s business as usual. Nothing much has changed, and while I would have loved to see Apple use this opportunity to reveal the mythical 14-inch MacBook Pro with smaller screen bezels and an even bigger battery, the current design and build quality is still “premium” by any definition, even if it’s starting to look a bit dated.

On the Inside – A Revolution

Everything that makes this computer so special is tucked away inside. The Apple Silicon M1 System on a Chip (SOC), combined with some brilliant software from Apple, allows the new MacBook Pro to do things that no Intel-based laptop I’ve ever owned could do.

The fans almost never turn on, the chassis stays cool to the touch during the most extreme benchmarks, and every app we used—weather it was optimized for Apple Silicon or being emulated in real-time by Apple’s Rosetta 2 software—performed better than we expected. This was particularly true of Lightroom Classic, which didn’t seem to struggle at all. 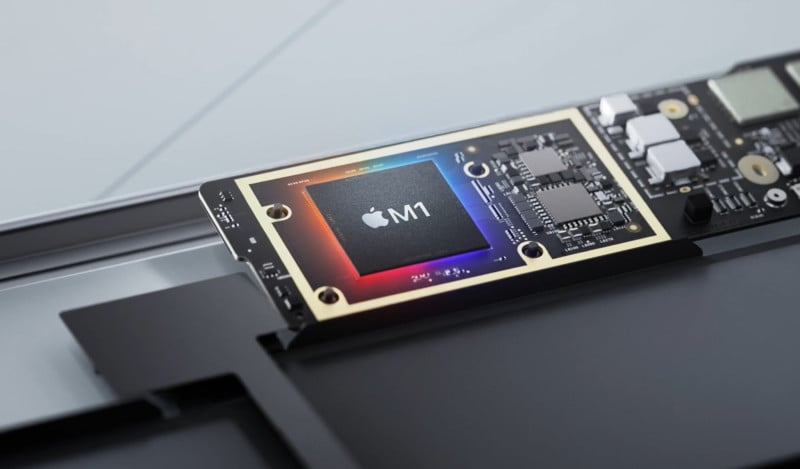 To quote a fellow tech editor who purchased the new M1 Mac Mini for himself:

I’m honestly running out of ways to test its limits. I’ve transcoded 10-bit ProRes 4K video from my EOS R (recorded over HDMI to Ninja V), imported thousands of images into Lightroom Classic (which is obviously still run through Rosetta 2), and run every benchmarking tool I can think of. This thing doesn’t bat an eye. Unless I can find a way to get some 8K Raw video from Red, I’m not sure I’ll be able to see the limitations.

Our own set of Lightroom Classic and Photoshop benchmarks2 help quantify this performance. While Adobe’s apps are more than capable of walloping any computer within walloping distance, the Apple Silicon Mac handled our tests like a champ. The charts below show the results of our standard Lightroom Import, Lightroom Export, and PugetBench benchmarks for both the Intel-based 2020 13-inch MacBook Pro (2.3GhZ Quad-Core i7, 32GB of RAM) and the M1 MacBook Pro, with the new Dell XPS 17 as a high-end reference point.

Keep in mind that the M1 MacBook was using Rosetta 2 to emulate Lightroom Classic and Photoshop 20213 for all of these tests. 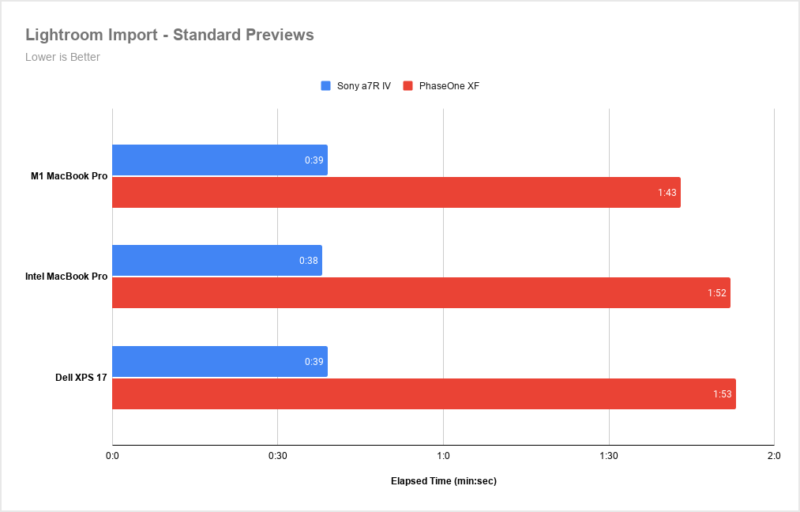 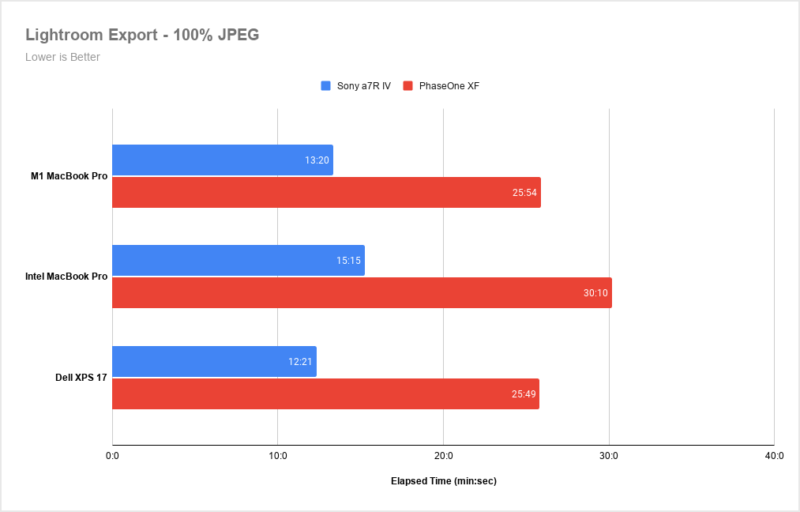 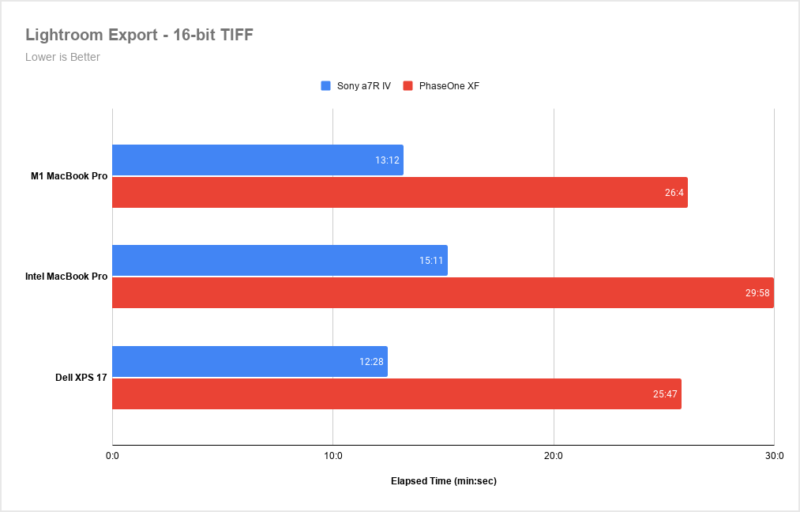 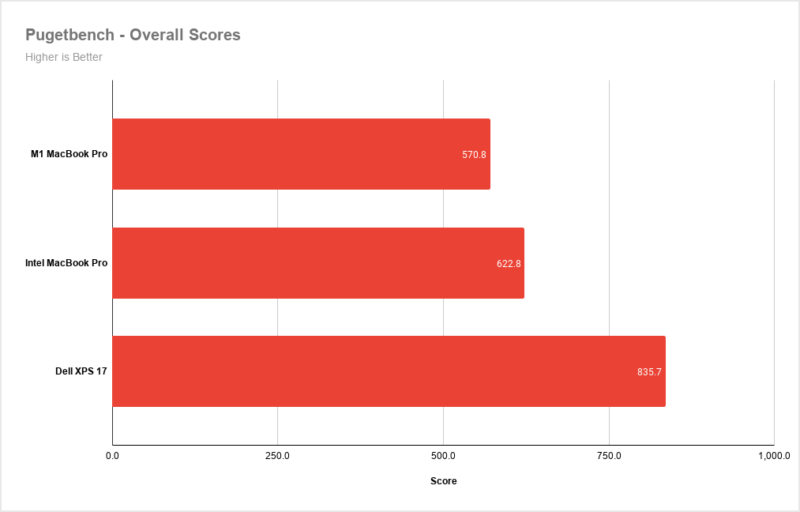 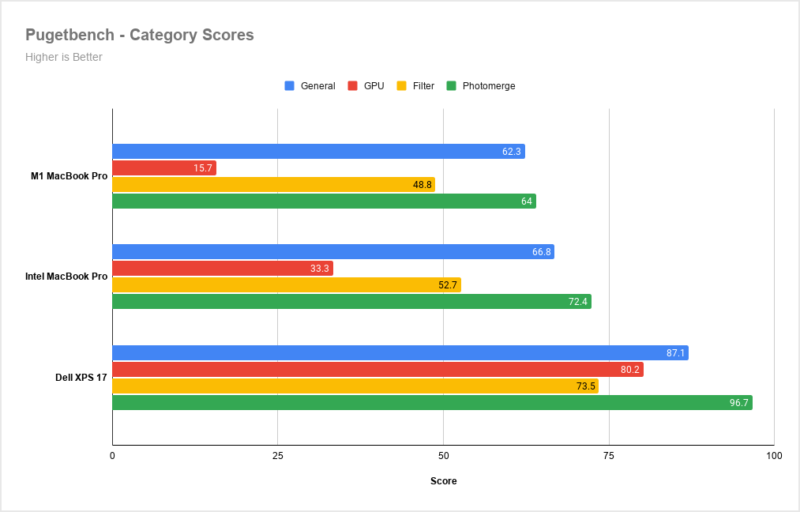 As you can see, M1 Mac beats Intel Mac in every Lightroom benchmark across the board; and while it still lost out in Pugetbench, the margin isn’t exactly huge. All this against an Intel MacBook Pro that costs $700 more and has 2x the RAM4. If this is how well the M1 chip runs Lightroom Classic and Photoshop via emulation, fully optimized versions are absolutely going to fly while using a fraction of the power.

Even the Dell didn’t outperform the M1 MBP by much in Lightroom, although the discreet graphics card and extra cores made a big difference in PugetBench.

Which, finally, brings us to battery life. To see how the M1 MacBook Pro compared to the Intel-based version, I ran a simple test. I opened Google Chrome and queued up a very very long 4K video on YouTube, with 5 random tabs (mostly Serious Eats recipes) open in another window in the background. I then ran that video full screen for as long as it took to kill the battery.

The Intel Mac drained fully in 5 hours and 27 minutes, which should give you an idea of how much of a battery hog Chrome is. The M1 Mac? It lasted 15 hours and 50 minutes.

Keep in mind that these machines are otherwise identical. In fact, the M1 MacBook Pro was set up using a Time Machine backup of the Intel-based version. Both are running the same software, the same background processes, and both were fully charged and unplugged only moments before hitting “play” on the YouTube video.

15 hours and 50 seconds… IN CHROME. And under normal use, I was frequently able to get two full days of work done without ever having to plug up. I have never been able to say that about any other computer, no matter how lightly I tried to use it. Judging the computer on efficiency alone, it would be a game-changer; pair that with the unprecedented emulation and the performance metrics above, and you’ve got something that practically demands your attention. 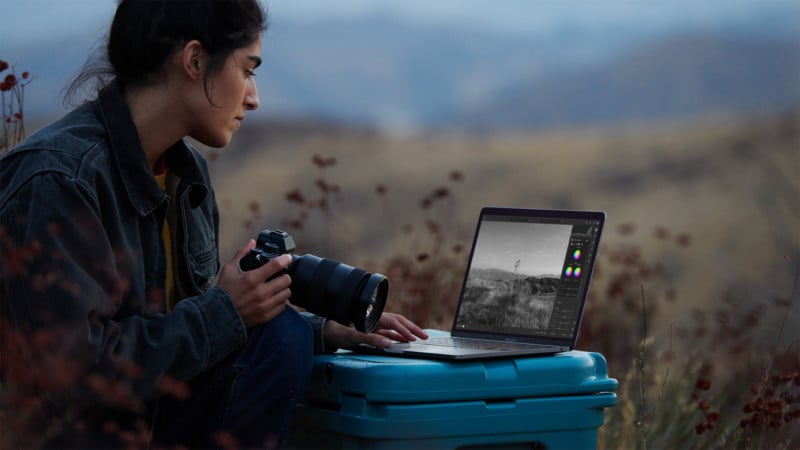 Apple is much further ahead than anybody expected them to be with these 1st generation Apple Silicon devices. Rosetta 2 emulation is so good it’s practically invisible, performance exceeds price point by a lot (at least by Apple standards), and efficiency is absolutely mind-blowing. I hoped for “good” with the ARM-based apps, and “usable” with non-optimized apps; I did not expect improved performance at 1/4 the power draw and 3/4 the price.

It’s always difficult to recommend a first-generation product. The first few iterations of a nascent technology typically bring the most aggressive improvements, and if the M1 is already this good I can’t wait to see what the M1X or the M2 bring to the table. What’s surprising is that Apple has successfully eliminated every other reason to wait around.

The M1 Macs are not “early adopter” technology. These products are already ready for prime time. Full support for Apple Silicon is already being prioritized by every major developer of creative software, Rosetta 2 is more than capable of taking care of you in the meantime, and the battery life gains alone make the M1 laptops an easy choice over the Intel alternatives.

But whether you need a new Mac right away or you’re willing to wait and see what Apple sticks inside the iMac or next-gen 16-inch MacBook Pro, there’s one thing I can say without any hesitation: this changes everything.

About the author: DL Cade is an art, science and technology writer, and the former Editor in Chief of PetaPixel. When he’s not writing op-eds or reviewing the latest tech for creatives, you’ll find him working in Vision Sciences at the University of Washington, publishing the weekly Triple Point newsletter, or sharing personal essays on Medium.

2 Standard Lightroom Import and Export tests are run using 100 61MP Sony a7R IV files and 150 100MP PhaseOne XF files. The Camera RAW Cache is purged and the program is restarted between reach run. Each reported time is based on a minimum of 3 consecutive runs. For Photoshop testing, we use Puget Systems’ PugetBench v0.8, because it is the last version to feature the Photo Merge Test. All scores are based on a minimum of 5 consecutive runs.↩

3 We would have loved to run the Photoshop benchmark on the beta version of Photoshop for ARM, which was available as of this writing, but the beta is still missing certain features that PugetBench requires.↩