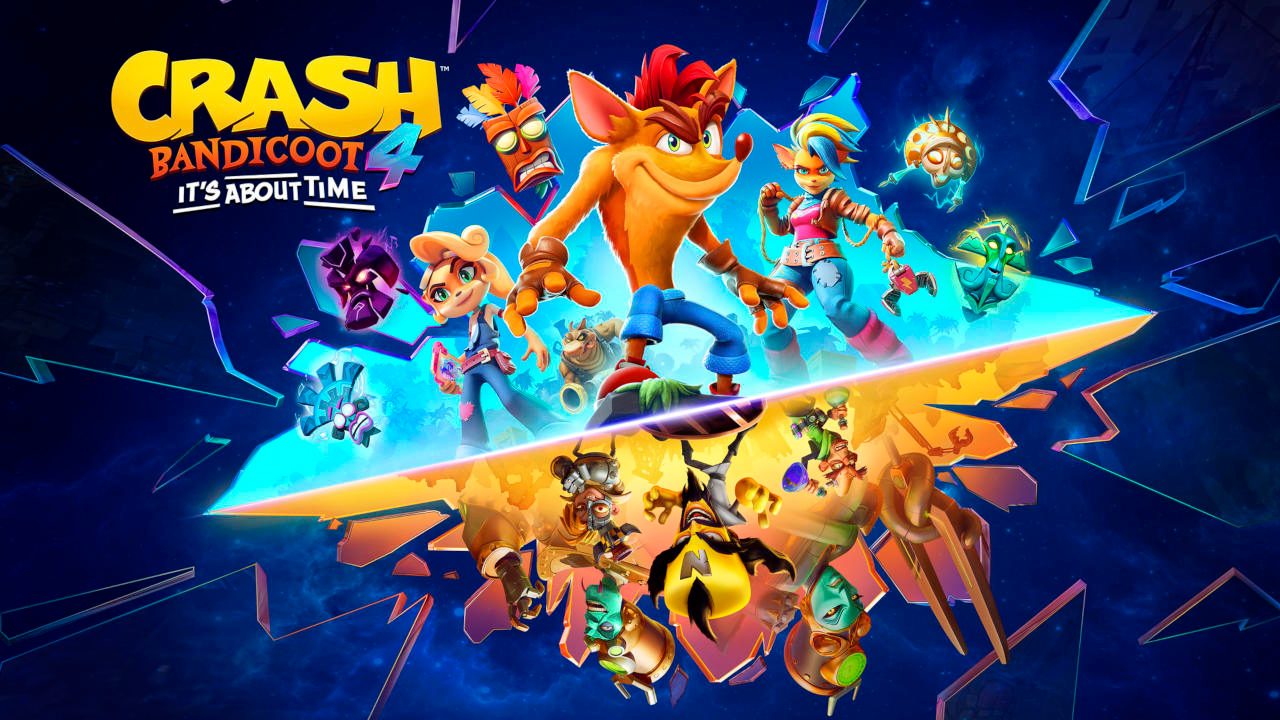 Crash, Coco and friends are back like never before with new powers, new worlds to explore, larger-than life boss battles, and a whole wumping lot more: welcome to Crash Bandicoot 4: It’s About Time, releasing for the PlayStation 5 starting March 12.

Embark on this all-original time-shattering adventure as Crash or Coco featuring new gameplay mechanics like wall running, rail grinding, and rope swinging. The addition of Quantum Masks gives the bandicoots even more abilities to stop Neo Cortex and save the multiverse.

Experience the same over the top action platforming the series is known for, including modern additions like quality-of-life improvements, visual upgrades, and the choice between Modern and Retro mode to match the appetite of both new players and longtime fans of the series.

The PlayStation 5 brings It’s About Time to new heights with unparalleled visuals, supporting 4K at 60 FPS. Crank up your speakers and swim in the crisp, dynamic enhanced 3D Audio.

And it doesn’t just look and sound great, it feels great, too! The PS5’s DualSense wireless controller brings adaptive triggers to your fingertips. Feel the DNA change in objects hit by Neo Cortex’s blaster and feel the grip of Tawna’s Hookshot.

What fan reaction to a specific detail/moment in Crash 4 surprised you the most?

Honestly, the attention to detail and the instantaneous knowledge shown by the fanbase has been a delight. We kept thinking ‘oh no one is going to notice that” or “haha, it’ll be weeks, months, years” before they notice that… But no, it’s instant. Things like the Crash of the Titans tattoo pattern on the surfboard in N.Sanity Beach being noticed when it was only on a trailer for a split second just blows my mind. Aside from the level of detail, the wonderful reaction to some of the new directions we took some of the characters in has been really cool to see. Dingo’s attempt at running a restaurant and Tawna’s new adventurous spirit have really resonated with a lot of people.

What gameplay or speedrun techniques have you seen emerge in the Crash community that have surprised you?

Folks have been doing something called a slide spin – where you initiate a slide and immediate spin while in the slide which allows for them to glide across the ground at high speeds and sometimes over small gaps. Seeing this “slide spin” technique paired with the unlockable “Triple Spin” move which provides a speed boost when used is insane. It’s like watching a tornado rip through a level in rapid time. That combined with the perfect timing and the absolute precision of these players is like nothing I’ve ever seen.

What N. Verted stage-type do you see emerging as the fan favorite, and why?

That is tough to say since there are so many different flavors of N.Verted dimensions! But I think the one that comes up a lot is the “painting” mode present in the Salty Wharf dimension. Seeing our normally colorful worlds presented in stark black and white really beckons players to spin and spray the world with paint. Seeing the explosion of paint caused by breaking crates is just such a fun interaction.

While more details are on the way, what would you say is the biggest benefit to playing Crash 4 on PS5?

There are several features that different players can really benefit from when playing on the PS5, but I love the native 4k resolution paired with the 60 frames per second. Seeing the amazing art and animation that the team has pulled off for this adventure presented in 4K/60 is just incredible. It’s crisp, it’s buttery smooth… it’s just outstanding.

for PlayStation 5. Get the game digitally and receive the Totally Tubular Skins (available upon completion of the second level), which put Crash and Coco into some digs that shows off their radical 90s roots.

Can’t wait until March 12? Players who purchase or already have Crash Bandicoot 4: It’s About Time on PlayStation 4 will be able to receive an upgrade to PS5 at no cost (except in Japan) starting on March 12.

*Players who own a disc version of Crash Bandicoot 4: It’s About Time must own a PlayStation 5 console that has a disc drive to upgrade. Owners of a PS4 disc copy must insert it into the PS5 every time they want to download or play the PS5 digital version. For full details, visit the FAQ page.

Ransom Payment No Guarantee Against Doxxing

Webinar and eBook: The Dark Side of EDR. Are You Prepared?