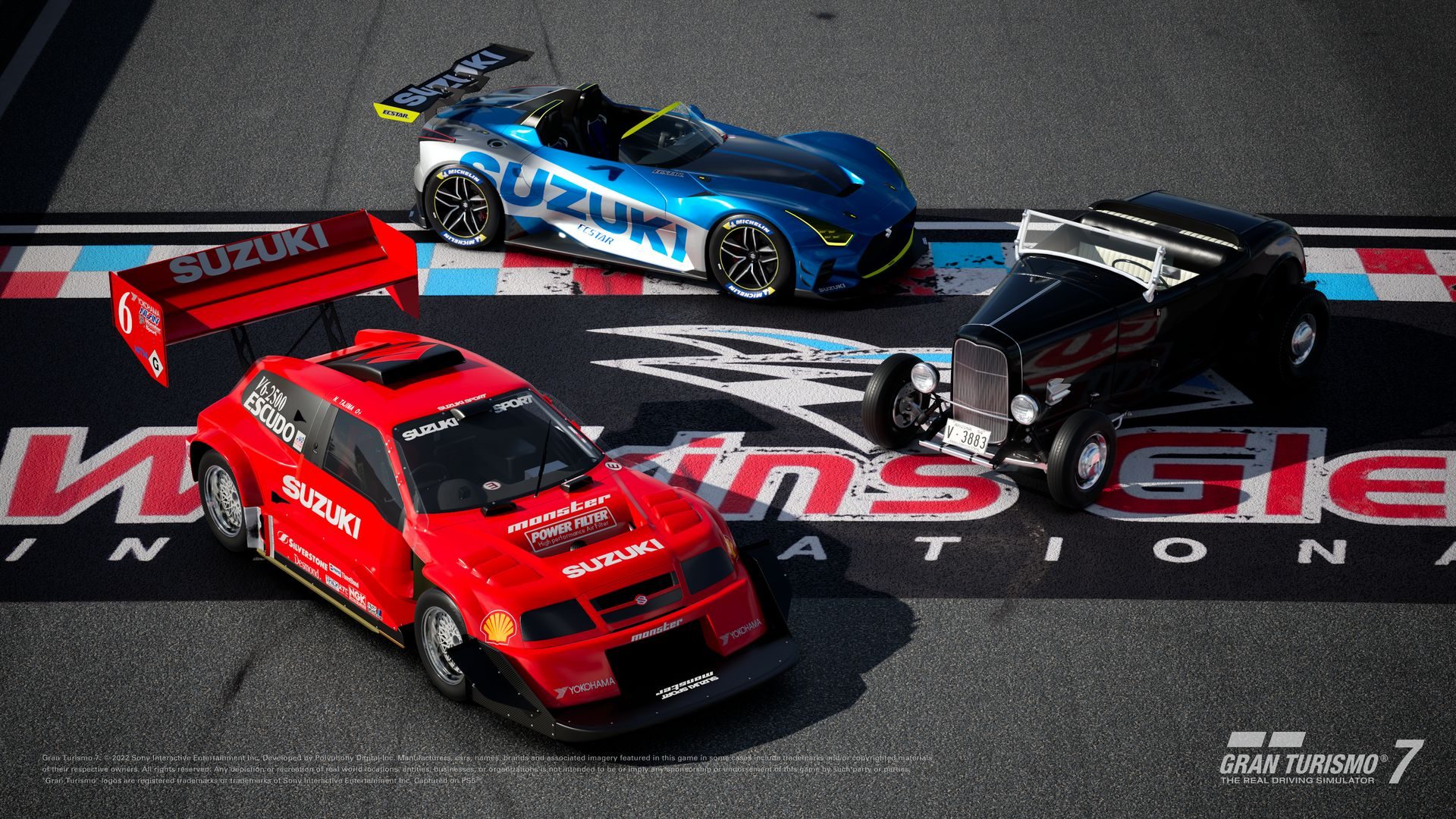 Returning to the series for the first time in a decade, the legendary Suzuki V6 Escudo Pikes Peak Special ’98 is a monster machine specially designed to overcome treacherous mountain climbing for any race vehicle in extremely tough conditions. The frame is a completely new design using an aluminum space frame. To maximize performance, the powertrain has been extensively modified, moving the engine from the front of the base model to a midship configuration. The fully tuned 2.5L V6 engine is fitted with twin turbochargers which allow it to produce a maximum of 981 BHP and 95 kgfm of maximum torque.

This model is a realization of Suzuki’s motor sporting prowess, which has been extensively created to meet the Gr.3 rules. The base Suzuki VGT uses a 1,340 cm³ (1,340 cc) Hayabusa engine that is mated to 3 high-power electric motors in an all-wheel drive powertrain. This Gr.3 version, though a typical front-engine, rear-wheel drive layout has been modified into a V8 twin-turbo powerplant with 2 Hayabusa engine blocks for a total displacement of 2,680 cm³ (2,680 cc). In this form, the monstrous engine can produce a maximum of 577 BHP at an amazingly high 10,000 rpm. Compared to the base model, the aesthetics of the design have been changed to achieve increased downforce, with an extended front spoiler as well as front and rear diffusers, a GT wing and air ducting on the bonnet.

In the world of customized cars, the United States is often number one in terms of quality, volume and genre. The oldest of these is the Hot Rod, now an iconic part of American culture. This is a movement that originated in the 1930s, where the Ford Model T and later Model A and Model B were extensively modified by their owners. These vehicles underwent extensive exterior modifications such as wheel arches, removal of bonnets, and body cutting to create chop-top convertibles. With the advancement of technology over the years more and more powerful engines were added to the cars.

Nicknamed “The Glenn”, Watkins Glenn International is a historic road trail found in New York State, about 260 miles northwest of New York City, which opened in 1956 and is surrounded by rolling hills. The first half of the track has high-speed sections with high-speed angles from the middle, with a combination of tight, technical turns in the last half. The undulating track is also narrow which encourages high-intensity racing combat. The back straight leads to a high-speed chicken, immediately taking a right turn in a banking section (outer loop), one of the primary highlights of the track. From there, the long course will move to the technical section known as “The Boot”, while the “short course” will completely bypass this section.

The following 3 additional menus have been added:

Be sure to stay tuned to the official GT and PlayStation channels as many more updates will come from the team. Until then, good luck!

Flashlight: Infinite opens a pre-registration for your phone – PIXEL.

5 Mobile Trends Marketers Should Know for 2021

Automated Home 2.0 – #31 We Discuss Our Loxone System on the House Planning...