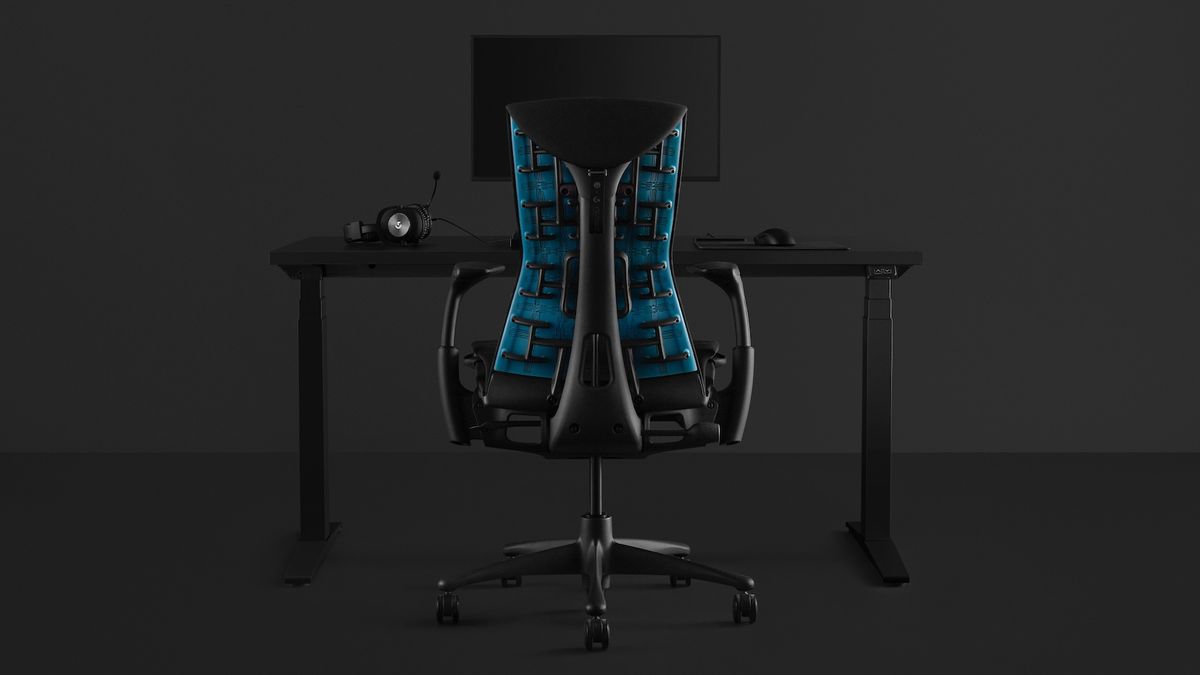 When Herman Miller and Logitech came together and released the Embody earlier this year, I immediately paid attention. The chair just looks like something you’d see in a science fiction movie, and had such a high price tag that I had to see if it was worth all the hype.

For all the talk I hear from gaming companies all the time of creating new and unique gaming chairs, this one genuinely looked like a new idea. However, at $1,495, it’s extremely expensive and really needs to stand out as one of the best gaming chairs ever to be worth dropping that huge wad of cash.

So, naturally, I reached out to Herman Miller to send me the Logitech x Herman Miller Embody crossover to see if it’s worth that considerable chunk of change. And, after sitting in it during two months of a pandemic where I don’t really leave my home, I am intimately familiar with how it feels, what it can do, and more importantly, what it’s missing.

Who is this even for?

Herman Miller is a company known more for making ergonomic office furniture that’s more built for getting work done than playing the best PC games for hours on end.

And, in a big way, the Logitech x Herman Miller Embody is no different. The form factor is all about supporting an active sitting position, something that’ll be music to the ears of esports players who need to be attentive throughout grueling gaming sessions where performance is of the utmost priority.

Gaming is nothing if not diverse, however, and it’s important to note that the Embody doesn’t have a headrest or anything like that, so it’s not exactly great for leaning back and playing Dragon Quest XI S while struggling to sleep.

In a way, targeting people that are looking for a pro-level, performance-enhancing experience makes sense. There are people out there that make a living by being really good at games, and a $1,500 price tag for a chair which will support that makes sense, especially when it’s as durable as the Embody is.

It’s just not meant for people to kick back after a long day of work and relax.

What sets this Logitech-branded Embody apart from the existing office chair is that it leans more into what pro gamers actually need. There’s an additional layer of foam to make longer sessions more comfortable. That foam also has a cooling aspect, which should stop you from getting literally heated during intense and stressful matches.

Is Embody the ultimate gaming chair?

Sitting in the Herman Miller Embody for such a long time, during a period of time where I’m spending more time than ever before playing games and using my PC, I’ve become very aware of exactly where the Embody excels and where it falls short.

It’s hard to talk about this kind of thing in a totally neutral way, too. While I do raid in Final Fantasy XIV and World of Warcraft, where the esports-minded design actually does help, a lot of the time I simply want to put my head back and vibe to some Dragon Quest or Cyberpunk 2077.

When I need to be at the top of the game, there’s a little latch on the bottom left of the chair, which will lock the back into an upright position. It almost seems silly, but it does help me focus a lot more than if I was able to just sink into a chair like I’d naturally prefer.

And unlike a lot of office chairs I’ve used in the past that do enforce an upright position, the Logitech x Herman Miller Embody does it without becoming literally painful to sit in. Let’s be real, these days I’m sitting in my office chair for upwards of 12 hours a day, so the fact that the Embody is able to promote this active seating position without making my butt hurt speaks volumes to the appeal of this gaming chair.

There are times, however, that I still long for the SecretLab Omega that I’ve stored away. There have been a lot of amazing single-player games hitting PC recently that I don’t really need to be super attentive to while playing. When I’m just relaxing while catching some Bugsnax, or playing a bit of Dragon Quest XI before bed, I’d much rather have a nice pillow to lay my head against.

And it’s not like I’m too tall or anything – honestly I’m rather short – but the back of the Herman Miller x Logitech Embody comes up to my shoulders, which means absolutely zero neck and head support.

This will likely be a non-issue for people who aren’t looking for something to sit in all day, but I know I can’t be the only one that appreciates relaxing on occasion. That lever I mentioned earlier does allow me to lean back, which helps. But again, the lack of any neck or head support makes leaning back a temporary thing.

As with anything in the PC gaming world, whether or not the Logitech x Herman Miller Embody is right for you will depend entirely on what you’re looking for out of your office chair. For a lot of esports fans and athletes, though, it’s going to be right up your alley.

Because Herman Miller is so focused on ergonomics right out of the gate, the Logitech x Herman Miller Embody is very customizable.

There’s a little pressure valve on the bottom right of the chair allowing you to adjust height of the chair, which is admittedly common – it would be hard to find a gaming chair that doesn’t let you raise your lower your seat this way.

I’ve already mentioned the lever in the back, but it’s impressive just how far it will allow you to lean back when it’s fully unlocked. I was a bit heavyset before lockdown, but even when I lean all the way back, I never feel like the chair is in any way insecure.

There’s also a knob on the back of the chair which will change the curvature of the back of the chair. The way Herman Miller pitches this is that it will help support the natural curve of your back. I can definitely tell the difference when I start messing around with it, but after years of bad posture – I am a writer, after all – I couldn’t quite find a setting that supported my entire back. Your mileage may vary, basically.

One of the only core issues I found in my time with the Logitech Embody is how easily the wheels on the chair will send it flying across my room. Again, I’m pretty short, and my desk is pretty tall, so there are occasions where my feet aren’t touching the floor. In times like this, I’m constantly having to pull myself back to my desk as the chair slowly drifts away from my desk.

This is something that would be easily combated with having a rug or something underneath the chair, but it’s something to be aware of.

The arm rests are adjustable, too, but it’s not to the same degree as something like a SecretLab chair. You can widen and narrow the arm rests and change their height, but you can’t swivel them or move them forwards and backwards.

The best part of the Embody however, has little to do with the chair itself. Unlike pretty much any other gaming chair I’ve been sent, the Embody comes pre-assembled. This means the box is absolutely massive, and I definitely needed to recruit my roommate to help haul it up to a third-story New York walk-up apartment. On the other hand, being able to just roll it out of the box and start sitting is a nice touch that may be worth the high admission price by itself.

It’s likely that this also means that the chair is more durable by virtue of it being assembled in the factory, rather than being hastily built in your living room. One of the first things you’ll see when you go to the chair’s website is that it’s “your last chair” and that you won’t have to replace it after a few years. We haven’t had time to test this claim, but from what we’ve experienced so far, it’s one of the most rigid chairs we’ve ever sat in.

Can a gaming chair be worth as much as a gaming PC?

Let’s do a bit of a thought experiment. You have $1,500 to spend on something gaming-related. You could buy a pretty decent gaming PC, an Nvidia GeForce RTX 3090 (if you can find one in stock) or even an amazing monitor like the Samsung Odyssey G9.

When you consider that a lot of the most popular gaming chairs are literally around 20% of the price, it’s a legitimate question whether or not a gaming chair can possibly be worth that much.

The answer to that question is likely going to be highly personal. In 2020, everyone is having a hard time, so $1,495 is a big ask for anything.

I can say that this is one of the most premium-feeling gaming chairs I’ve ever seen, even if it doesn’t sport the same garish lighting that mars other high-end gaming products.

But, again, this isn’t a gaming chair with universal appeal. You need to be on the market for something that’s aimed entirely at boosting your performance in games, rather than relaxation. I don’t exactly like this trend in gaming products where everything is geared towards esports when those games aren’t exactly the pinnacles of accessibility anyways.

It’s a trend nonetheless, and if it’s what you’re into and you have the cash to spare, the Herman Miller Embody should be on your tech radar. But don’t think that just because it’s a premium product that its going to be good no matter what – if you want to just sit back and relax, there are other chairs that will work so much better.