BCS, The Chartered Institute for IT, recently held a diversity in tech panel. Following the event, Computer Weekly asked some of the panellists about their first computers and their first experiences of computing, looking at how people got started in their IT careers.

When computers first started appearing in business during the 1960s and 1970s, access was limited to highly skilled technicians, and people would be allocated time slots which they could use to to run the programs they wrote. As computers became more affordable, more people were able to access these machines. The big breakthrough came with the advent of low-cost computers in the late 1970s.

During the 1980s and 1990s, interest in IT often started with a home computer being bought for the household, which was mainly used for playing games. But over time, some of the people Computer Weekly contacted said they found themselves learning to program. Others wanted to find out how the device actually worked, leading them down a technology hardware route.

Nzube Ufodike, vice-chair at the BCS London Central Branch, said his first computer was a Pentium 286 back in the early 1990’s, when he was growing up in Jos, Nigeria. “Back then, as an avid gamer, Prince of Persia, Star Trek and Solitaire were my primary reasons for fighting with my brothers for screen time,” he said.

At the time, he said, one of his neighbours regularly used the computer to learn QBasic. About six months later, Ufodike finally realised what programming was about. However, he added: “My interest in programming quickly disappeared and I realised I was more interested in admiring an older boy than actually learning to code.”

Dorothy Monnekosso, a professor of Computer Science at Leeds Beckett University, said: “My first experience of computers was with the ZX Spectrum,” adding that learning how to program in Basic was very simple and only took a matter of hours, rather than days. “More interesting for me was ‘what’s inside’, so I opened it up, and was fascinated.

“I looked at all the integrated circuits and decided I needed to build my own computer,” she said. “That led to hours and hours in my bedroom and the local library, pouring over books of electronics; hours in Maplin, and my first working design with a Motorola chip.”

After a few mishaps along the way, such as reversing the wires on the transformer for the power supply resulting in sparks and some smoke, the experience of building her first computer, including designing a printed circuit board, led Monnekosso to study for a degree in electronic engineering.

Ip-Shing Fan, chair of BCS and a senior lecturer in Enterprise Systems IVHM Centre at Cranfield University, said he grew up in Hong Kong, which meant his early experience of computing was a bit different to that of people from the UK. “My first contact with computing was an Olivetti machine that my Sixth Form Maths teacher used to teach us to calculate Pi to the nth decimal.”

The first real computer Fan used was a North Star Advantage with a 5MB Winchester disk in 1983. “A family friend was on the bleeding edge of technology and invested in a system to automate the office of his trading company,” he said.

“The system he commissioned did not work for his office manager. Together with three other friends, we took up the challenge to develop a working system for the company. That summer, we had just graduated from our Industrial Engineering degree and were looking for jobs. The system we built integrated the records and reports for the trading process from customer enquiries, orders, shipping and payment.”

The software, written in a North Star version of Basic ran the CPM operating system, and supported two users who connected via terminals. “There were no courses and textbooks and we had to self-learn. It was a wonderful experience that launched us into the information revolution.”

For many children growing up today, their very first experience of computing is their parents’ smartphone and tablets with nursery and pre-school games. As with previous generations, many young people have their first computing experiences playing games.

However, in spite of the computer games industry being bigger than the movie and music industries combined, as Computer Weekly has previously reported, these days, coding is not seen as an attractive career for young people.

Chair of BCSWomen Sarah Burnett, said: “We can run as many coding clubs with fun coding projects and mentor as many youngsters as we can, but we will not attract large numbers into the industry without role models that inspire the young.

“There is a clear lack of role models, and this is not helped by the entertainment industry that always portrays techies as freaky geeks,” she said. “We need the likes of Disney, BBC and ITV to help by creating cool sci-fi techie heroines to show that girls can be ace at coding too. Let’s not always leave it to magic and fairies to save the world.”

Burnett said that among her first experiences of computing was programming in Motorola 6800 microprocessor assembler. “I had to learn to use hexadecimal,” she said. “There were no such luxuries as having simple multiplication functions: I had to code everything from scratch. Later, I used VAXes when I joined the Digital Equipment Corporation – the best machines that were around at the time.”

(17)
₹300.00 ₹199.00
Premchand's novel on social issues Language Published: Hindi world's most famous author's novels
(as of October 17, 2021 17:32 GMT +05:30 - More infoProduct prices and availability are accurate as of the date/time indicated and are subject to change. Any price and availability information displayed on [relevant Amazon Site(s), as applicable] at the time of purchase will apply to the purchase of this product.)

All About Marvelous Me!: A Draw and Write Journal

₹480.00 ₹470.00
Dover Publications
(as of October 17, 2021 17:32 GMT +05:30 - More infoProduct prices and availability are accurate as of the date/time indicated and are subject to change. Any price and availability information displayed on [relevant Amazon Site(s), as applicable] at the time of purchase will apply to the purchase of this product.)

₹1,500.00 ₹899.00
▶6 Pages - 12 Things to Learn,14*24 Inches. ↬ Fabric : Soft Velvet Washable, Not Breakable and Durable, Light Weight. ↬ These Cushions are a perfect addition to your little one's room. ↬ Elegant print... read more
(as of October 17, 2021 17:32 GMT +05:30 - More infoProduct prices and availability are accurate as of the date/time indicated and are subject to change. Any price and availability information displayed on [relevant Amazon Site(s), as applicable] at the time of purchase will apply to the purchase of this product.) 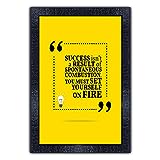 PNF-534-MOTIVATIONAL QUOTES success isnt a result of spontaneous combustion you must set yourself on fire with Wooden Synthetic Frame Painting (13.5x19 inch,Multicolour,Synthetic)

₹799.00 ₹425.00
Item Size: 13.5 inches X 19 inches Included Components:One UV textured print framed painting without glass Special Feature:Light weight quality with multi-effects Care Instructions:Water Splash Proof,... read more
(as of October 17, 2021 17:32 GMT +05:30 - More infoProduct prices and availability are accurate as of the date/time indicated and are subject to change. Any price and availability information displayed on [relevant Amazon Site(s), as applicable] at the time of purchase will apply to the purchase of this product.)