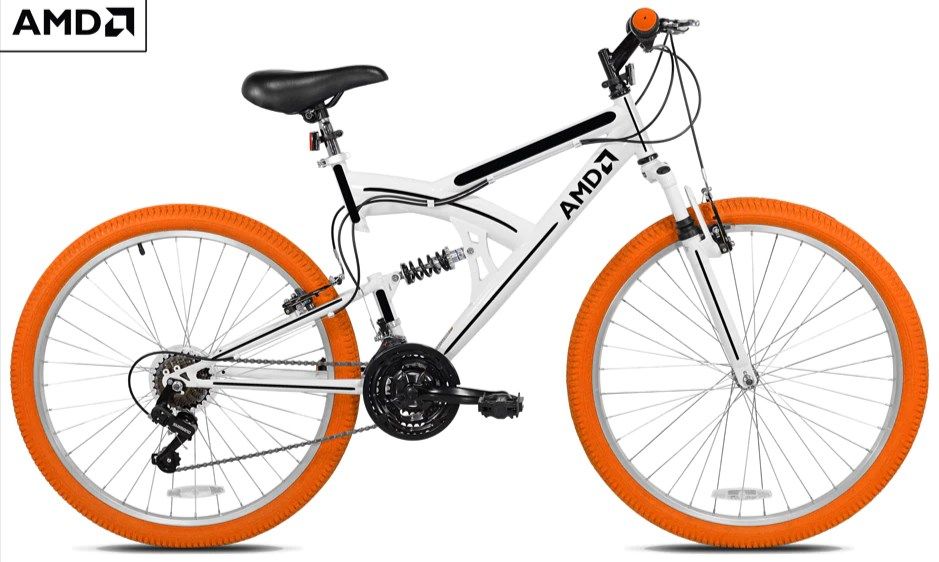 Following Nvidia’s announcement of the RTX 30-Series GPU’s we’ve now discovered that AMD is switching things up a gear and is selling road and mountain bikes from its US fan store. That’s right, you can now whizz around on your snazzy two-wheeler, sporting the AMD logo as a form of free advertising for the brand.

The road bike, or cruiser (via Guru3D), isn’t the fanciest of its kind, but looks kinda swanky with its arched frame, and may have a place for those who don’t mind sitting a little low and far back from their handlebars. You do have to pedal backwards to break, though, which is not to everyone’s taste, and there’s only one gear. We just have to hope that’s not an allegory for the upcoming AMD RDNA 2 release.

The AMD mountain bike’s list of features is a lot more comprehensive, with a dual suspension frame, 21 speeds, and Shimano twist grip shifters, which I assume is the cycling equivalent of fancy flappy-paddles. I hope this makes sense to some of you out there, because I deal in computers, not cycles. As we all thought AMD did—until today.

Both the AMD road and mountain bikes are retailing at $299—which doesn’t necessarily bode well for the high-end pretentions of the mountain bike especially. There are a couple of black or white paint-job combos, each accentuated with vibrant tangerine features. I mean, look at those tires. These bikes ship anywhere in the US for just 50 bucks, but don’t export to any other countries… way to exclude half your fan-base, guys.

Although such merch is all marketing, as opposed to AMD having a newfound genuine dedication to the world of cycling, it’s certainly a clever way to cash in, what with everyone’s newfound cycling obsessions surfacing over the lockdown period.  The bikes obviously aren’t actually made by AMD itself, there are no 7nm TSMC transistors anywhere near them after all, but the logo’s on it, so it counts.

But we’re still anticipating some compelling new GPU things from AMD around October time, alongside the new Zen 3 Ryzen CPUs, so let’s hope the company can keep up the product cycle and it ain’t all torque.

How to update Android Auto

How to Build a Brand Ambassador Network on Instagram