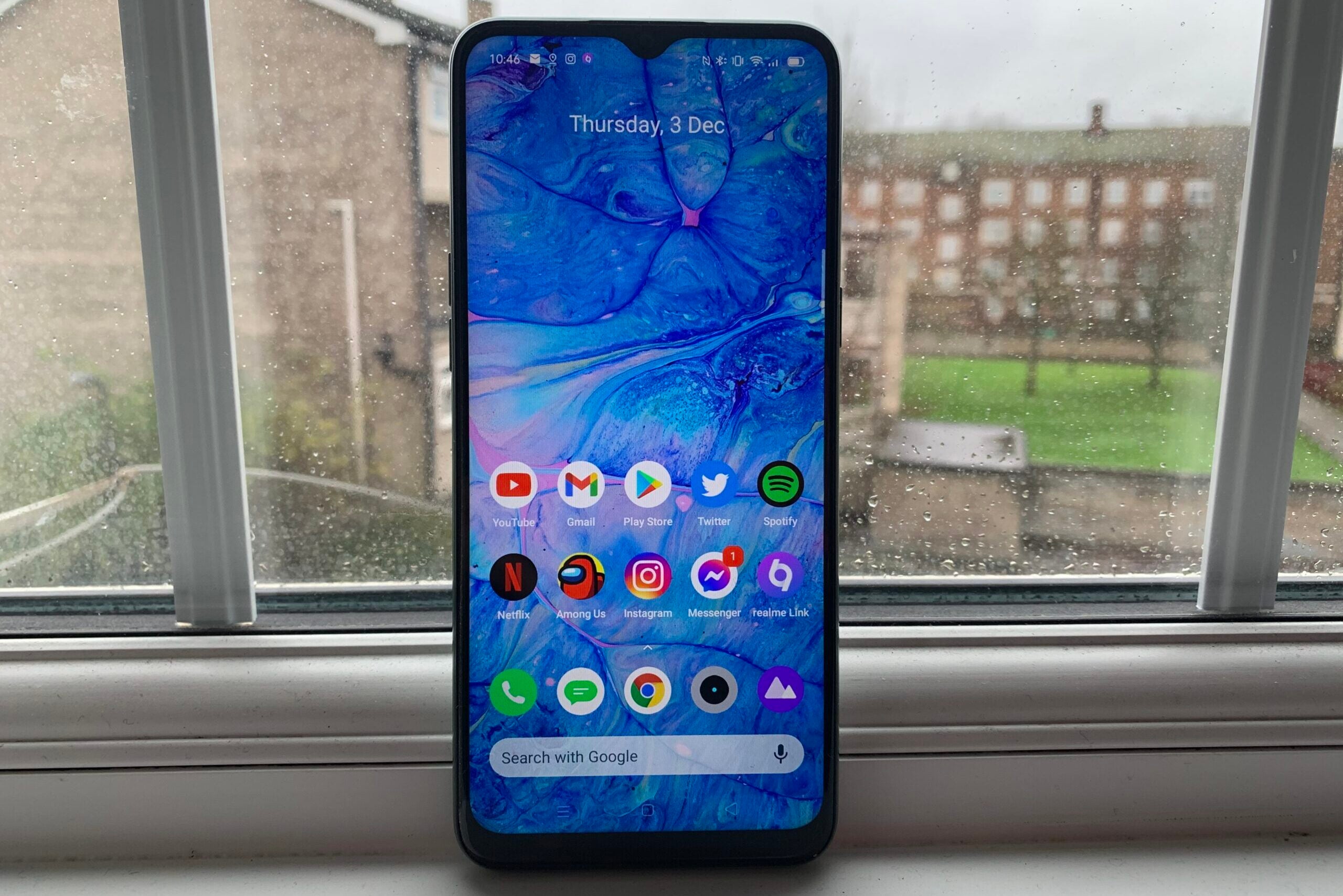 The Realme 6i is a beautifully designed smartphone that on the surface offers a compelling set of features, including a long-lasting battery and capable gaming performance at a budget price.

However, the camera is disappointing: while the quad layout is fantastic in some settings, the quality can be inconsistent – in low light, macro and zoom images fall short. Considering the Realme 7 offers higher specs at a similar price, it’s tough to recommend the Realme 6i to anyone looking beyond the basics.

The Realme 6i is an affordable smartphone that makes promises far beyond its budget-friendly price.

The cheapest phone in Realme’s 6 series, the 6i sits below the Realme 6 and the Realme 6 Pro. For £30 more than the 6i, the 6 takes advantage of a smooth 90Hz display and 64-megapixel quad camera, while the near-£300 6 Pro boasts a similar setup along with a Snapdragon 720G processor and a 12-megapixel telephoto lens.

In terms of price, the 6i also sits just above the recently announced Realme 7 and firmly in the price range we look for when judging the best cheap phones. We were impressed by the 7 as a budget mobile gaming device, awarding it four and half stars. The 7 similarly packs a Helio gaming processor, 48-megapixel quad camera, 5,000mAh battery, plus the addition of a 90Hz display.

With just £10 between the 6i and 7 phones, is it still worth paying more for the 6i? Read on to find out how the smartphone performs.

Realme 6i design and display – An optical illusion on the back

The Realme 6i is an eye-catching phone. The front is almost entirely encompassed by a 6.5-inch HD+ display, with a small bezel at the bottom of the screen and a tiny dot-drop selfie camera in the top centre. This offers the phone a modern look that’s comparable to many flagships on the market right now.

The display is sharp and colourful, making it a joy to use. However, scrolling can feel slow compared to other handsets. This wouldn’t ordinarily be an issue on such a cheap Android phone, but the Realme 7 offers a smoother 90Hz experience at a similar price. Although the fast refresh rate on the 7 is rare for such a phone in its price range, it results in the 6i’s display paling somewhat next to it.

The rear of the phone showcases a unique vertical ripple design that in the light almost appears 3D. The device is available in two colours: White Milk and Green Tea. I got my hands on the latter; it’s a deep forest green shade with a soft matte finish.

The lightweight, plastic rear has a paper-like feel and does a fantastic job of repelling any unsightly fingerprint marks. The ripple pattern is interrupted by a responsive fingerprint scanner in the centre, while a vertical camera module in the upper-left corner houses the phone’s four sensors.

On the sides of the 6i, you’ll see volume buttons and a power button, while the USB-C charging port and headphone jack can be found along the bottom of the phone.

Realme 6i camera – Takes great pictures half of the time

The 48-megapixel AI quad camera is arguably the Realme 6i’s headline feature – which is the reason the hit and miss quality is so disappointing.

The 48-megapixel lens is the most impressive of the bunch, offering crisp detail, intense contrast and punchy colours. I enjoyed the images captured with this lens and it quickly became my favourite to shoot with.

Then there’s the front camera. I was really impressed with the 16-megapixel lens in daylight; the camera offered plenty of detail and bright, eye-catching colours, pumping my faded turquoise hair up to a vivid blue. However, the results were significantly less flattering in low-light conditions and indoors, causing my skin to look dull and washed out once the sun went down.

The rear portrait lens offers a similar outcome to the selfie camera – albeit with a bit more detail – while the 119-degree wide-angle lens was a welcome addition, offering a level of contrast comparable with the 48-megapixel lens with more space in the frame.

I encountered the biggest issues with the 6i’s camera when using the macro lens and snapping pics indoors. I struggled to get the macro camera to focus on the subject for taking close-ups, and the quality suffered significantly in low light and indoor settings, resulting in little detail, washed-out colours and over-sharpened results when compared with photos taken in daylight. Zoom performance was poor as well.

If you prefer to take photos outdoors and in the daylight, you’ll be impressed with what this quad camera setup delivers for less than £200. However, night owls and smartphone photographers should beware.

The 6i was the first phone released to pack the Helio G80 chipset. According to Realme, the octa-core, 2.0GHz CPU offers a 35% performance boost over the previous generation, while the 1,000MHz Mali G52 GPU is 25% better than its predecessor.

I found these numbers matched with my real-world results. The phone is fast and responsive while gaming, although this is one more area in which a faster refresh rate would really shine. Regardless, the G80 chip makes the 6i a great option for anyone on the hunt for an affordable gaming device.

As far as overall performance is concerned, I found that the 4GB of RAM of the review model offered enough speed to navigate and switch between apps at a decent rate – although, of course, not in the same league as higher priced phones. Nevertheless, if you’re on the hunt for reliable, affordable performance, then the 6i is a great option.

RAM and storage options include 3GB to 4GB and 64GB to 128GB. There’s also space for up to two SIM cards and one microSD card in the card slot, affording the option to upgrade the storage further.

Realme 6i battery life – Days of use

Battery life is one area in which the 6i shines. Realme packs a hefty 5000mAh battery into the device, which claims to offer an incredible 39 days of standby time.

Of course, this number is dramatically shorter when the phone is in use. I found it easy to go a night without plugging in the device to charge – a feat that feels near-impossible with my usual iPhone XR.

The phone also offers 18W quick-charge for gaining power at speed, support for reverse charging, plus it’s compatible with USB Type-C which still isn’t always a given at this price.

I found it was able to hit 50% battery in under an hour and a full charge in about 2hrs 30mins.

You should buy the Realme 6i if

The Realme 6i offers a great all-round experience, but doesn’t outperform rivals featured in our best budget phone guide. However, if you’re looking for a phone that delivers solid performance for browsing or gaming, takes great photos outdoors and offers a long battery life, you won’t be disappointed.

One standout feature on the Realme 6i is its sizeable battery. If you want a phone that will last for multiple days without requiring a charge, the 6i is a good choice. Fast-charge and reverse-charging are also compelling additions.

One of my favourite aspects of the Realme 6i is its unique, light-shifting, vertical ripple design. While this shouldn’t be the main reason for opting for this phone, it’s certainly a must for those who want a device that stands out from all the iPhones and Samsung Galaxy devices crowding the streets.

You should not buy the Realme 6i if

It’s especially unfortunate that the camera falls short given how well-kitted out the quad setup appears to be at first glance.

While the 48-megapixel main lens will be sufficient for most casual photo-takers, the camera will fall short for a dedicated smartphone photographer. The camera’s abilities are limited in low light and indoor environments, and its macro and zoom shots are filled with noise.

This point may seem counter-intuitive given the display is listed as one of our pros at the start of this review. However, while the 6i’s sharp and vivid screen is attractive on the surface, other phones in Realme’s line-up pack faster refresh rates. This means they can offer smoother scrolling and more polished gaming performance for a similar price.

The 6i performs incredibly well for its price, thanks to the Helio G80 chipset. However, if you’re looking for a cheap gaming phone with a similar set of features, consider the Realme 7. It’s packed with the newer G95 chip, more generous RAM options, and a faster 90Hz refresh rate for smoother scrolling and gameplay – all for £10 less than the Realme 6i.

Hannah joined Trusted Reviews as a staff writer in 2019 after graduating with a degree in English from Royal Holloway, University of London. She’s also worked and studied in the US, holding positions …

iPhone SE 2022 vs iPhone 11: Which iPhone is the most economical acquisition? ...

A piece of television is coming to a new channel! | Atomics