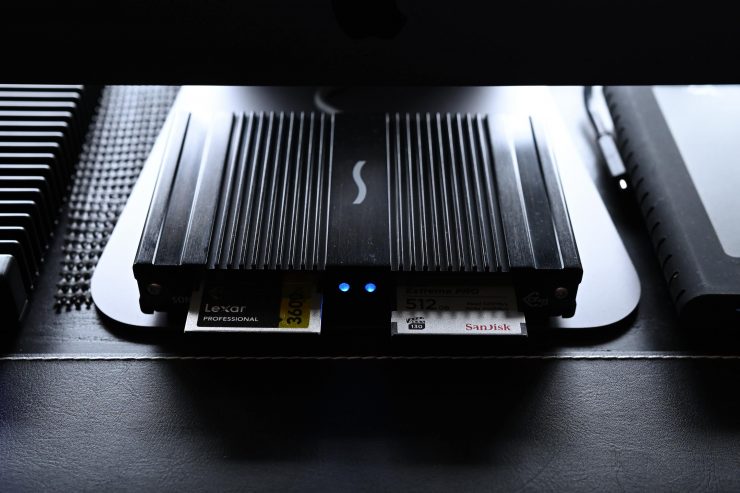 The Sonnet CFast 2.0 Pro Card Reader is certainly not a new product as it was first launched way back in 2016. So you may be wondering why on earth I am reviewing it now. Well, despite being four years old it is still a very relevant product that does something only a handful of CFast 2.0 card readers can.

A lot of cameras still use CFast 2.0 cards

Canon, ARRI, RED, and Blackmagic Design all have cameras that record to CFast 2.0 cards. Despite some manufacturers moving to CFexpress and newer forms of SD cards, CFast 2.0 is still widely being used.

In fact, two new cameras that were announced in 2020, the RED Komodo and the Blackmagic URSA Mini Pro 12K both utilize CFast 2.0 cards.

The only trouble with CFast 2.0 cards is if you are shooting a lot of data they are not the fastest option when it comes to offloading. With current CFast 2.0 cards’ read speeds are usually somewhere between 500-550 MB/s. This means that with a single CFast 2.0 card reader it is going to take a lot of time to offload a 512GB card, even if you offloading to a fast SSD or NVMe drive.

You are always going to be limited by the physical read speeds of the media you are using. So, to make things quicker the Sonnet CFast 2.0 Pro Card Reader uses dual slots and Thunderbolt 3 to help speeds things up.

Instead of offloading a single card at 500-550 MB/s, you can offload two cards simultaneously at a combined speed of up to 1000 MB/s. Effectively you are reducing your offloading time in half, which is a big deal.

Now, you do need to keep in mind that if you are for example offloading both cards to the same drive at once, you will need a drive that can support write speeds of 1000 MB/s and above.

The Sonnet CFast 2.0 Pro Card Reader connects directly to any Mac or Windows computer’s Thunderbolt 3 port or at the end of a Thunderbolt 3 device chain. You don’t need to mains power the reader, it is completely bus powered.

This makes it suitable for field use where you may not have access to mains power.

The reader also comes with an in-built captive cable. The cable is reasonably long, but I am always in two minds about in-built cables. On one hand, I like that the cable is always there so you can’t forget or lose it, but if it happens to break in the field you can’t just use another cable. Should the cable ever break, it can be replaced by Sonnet or a Sonnet-authorized service center.

The biggest caveat to the Sonnet CFast 2.0 Pro Card Reader is the physical size and weight. Compared to most CFast 2.0 card readers it is ginormous.

The reader’s shell is made from extruded aluminum and it is very solidly constructed. Compared to most CFast 2.0 card readers the build quality almost seems like overkill.

The Sonnet CFast 2.0 Pro Card Reader meets real-world expectations. I was able to use offload programs such as Hedge and copy and verify two CFast 2.0 cards to the same hard drive, or multiple hard drives at both cards full read speeds.

This saves a ton of time out in the field when you need to back up your material. If you have shot 4-5 cards and you need to back that material up to multiple drives at the end of the day, you can do so in half the time it takes when using a single card reader.

How much is your time worth? The quicker you can back up and verify your media the better. I don’t know about you, but the last thing I want to do at the end of a long day shooting is to take extra time dealing with media.

Angelbird used to sell a dual CFast 2.0 card reader but it has been discontinued.

Despite the size and weight of the Sonnet CFast 2.0 Pro Card Reader, my only real complaint is that I didn’t buy this product years ago. My primary camera uses CFast 2.0 cards and for the last 5 years, I have been using a single CFast 2.0 card reader.

The Sonnet reader doesn’t get overly hot, it performs as advertised, and most importantly it saves me a ton of time at the end of the day when I am backing up footage. While $195 USD may sound like a lot for a card reader, the time it saves me has made it a very good investment.

Can we predict what games will be hits on Twitch?