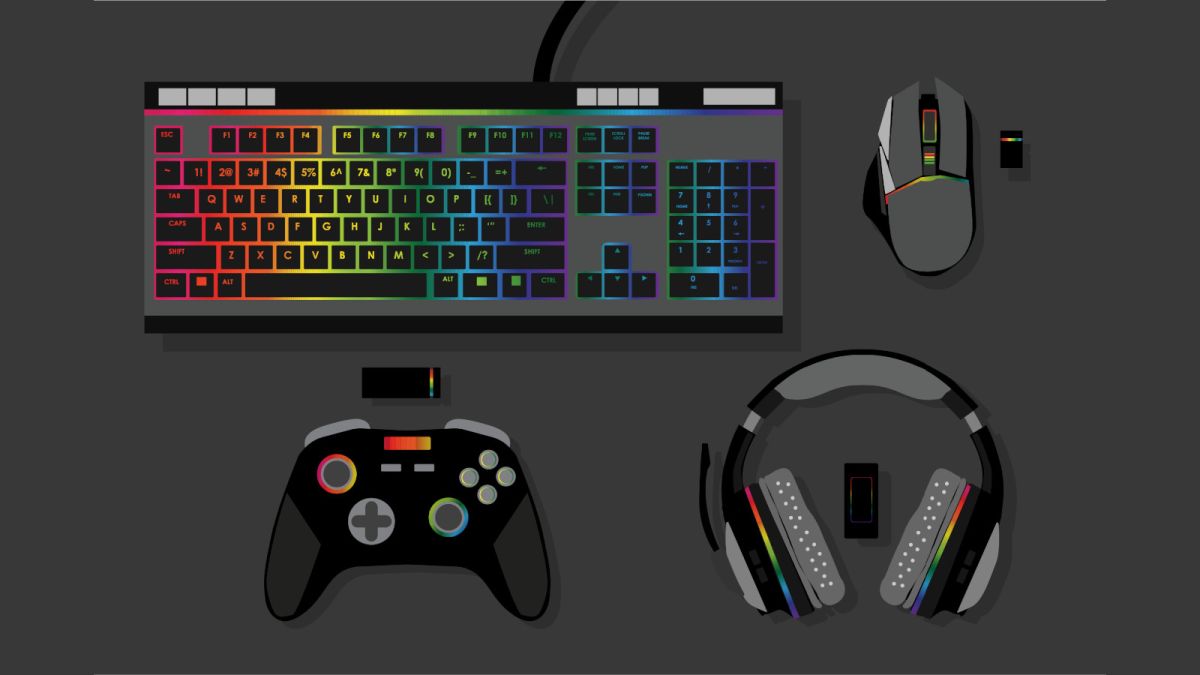 Gaming accessories such as keyboards, headsets and controllers have changed a fair bit over the last few decades, not only to offer better ergonomics and features, but also to keep up with current style trends.

One of the more prevalent phrases you might see thrown around is ‘RGB lighting’ as having colorful LED lights across your setup has become more popular, but there are some unfortunate traps that you might fall into if you’re not paying attention.

Let me explain. ‘RGB’ stands for ‘Red Green Blue’, a type of color space used in additive color synthesis across displays to create a huge spectrum of other colors by using a mix of red, green, and blue LED lights. LEDs first became available in the 1960s in red, and eventually followed by green and then orange / yellow, but it wouldn’t be until much later that the ability to create other colors was developed.

The inventor of Blue LED (which finally arrived in the 1990s) was awarded a noble prize in 2014 as blue was the final color required to make almost any color when mixed alongside other LEDs. This revolutionized technology in things like TVs and computer screens, but we can also see this applied in other areas, such as color-changing light bulbs from brands like Philips Hue.

In the world of gaming peripherals and accessories though, RGB has also become associated with flashy rainbow lights that can sometimes be customized to match your existing setup. If your gaming keyboard has a backlight that switches between a specific shade of green and blue, you could also extend this across other RGB-capable peripherals like your gaming mouse or even within the PC build itself.

This customization is prevalent across many of the well-recognized gaming brands such as Razer, MSI and Asus, all of which have software available such as Razer Chroma, MSI Mystic Light and Asus Aura that can be used to sync your choice of lighting style and effects across the rest of your peripherals, providing they’re compatible with the same software.

What to look out for when buying RGB products

Thing is, just because something is labeled as an ‘RGB’ capable product, doesn’t mean you’re getting that customization capability, and it’s possible that some manufacturers and retailers are using this as a loophole to catch out unsuspecting consumers.

In most cases, you’re still getting the recognizable flowing rainbow lights, but without appropriate software to control them or alter the color beyond presets that are built into the product itself. If you purchased, say, a new headset stand with built-in RGB lighting for example, you might not be able to configure it to match the rest of your gaming PC.

In the case of the above image taken from an IFYOO RGB Gaming Headset Stand listing, the brand has been very forward with the limitations of the product, and the information is also clear on the product description, with only four color presets available. If you wanted the headphone stand to display a pink or orange light, it doesn’t have that capability.

Still, there are many, many more listings online where this information isn’t clearly available, either tucked away in some small print or the product description or in some cases, not available on the listing at all.

There are also instances where a product will be listed with the phrase ‘customizable RGB’ when in reality, this customization is limited to switching between manual presets. You might feel lied to if a product arrived and didn’t have the features you were expecting, but as long as the purchase uses the RGB color model then the seller isn’t doing anything wrong.

How to not get caught out

There are a few easy ways to avoid disappointment thankfully. If you already have a branded peripheral from one of the brands we mentioned earlier like Razer and Asus, it’s likely that other peripherals from that company that are labeled as RGB will also follow the same customization, so if you want a new gaming mouse that has lighting that can sync to your existing Razer keyboard, just look to buy a Razer mouse.

That said, these brands can be pretty expensive, so if you’re low on funds and want to have the same customization features then you might not want to drop a stack of cash on a premium-branded gaming accessory. Luckily, there are other branded accessories that might work alongside your existing hardware.

On listings, look for phrases like ‘works with MSI Mystic Light’ or whatever other software you’re using to manage your RGB lighting. It’s unlikely this feature will be hidden away given its potential for marketing, so it shouldn’t be hard to find.

Similarly, keep a lookout for the actual lighting capabilities of the product you’re looking to buy. In many instances, you’re getting the standard flowing rainbow setting and then a handful of solid color options, which should be clearly available on the page. If the product is advertised as ‘RGB’ but does not mention what color presets are available OR what customization and management software it’s compatible with, we would suggest that you steer clear.

We should also mention that just because some of these products don’t allow full customization, that doesn’t make them bad. If you have everything set to the usual rainbow vomit or it comes with a preset color that’d you’d default to anyway then there’s no reason for you to avoid them. Just make sure you carefully read all the information available to you prior to making a purchase and avoid assumptions about what RGB lighting actually means on gaming accessories.