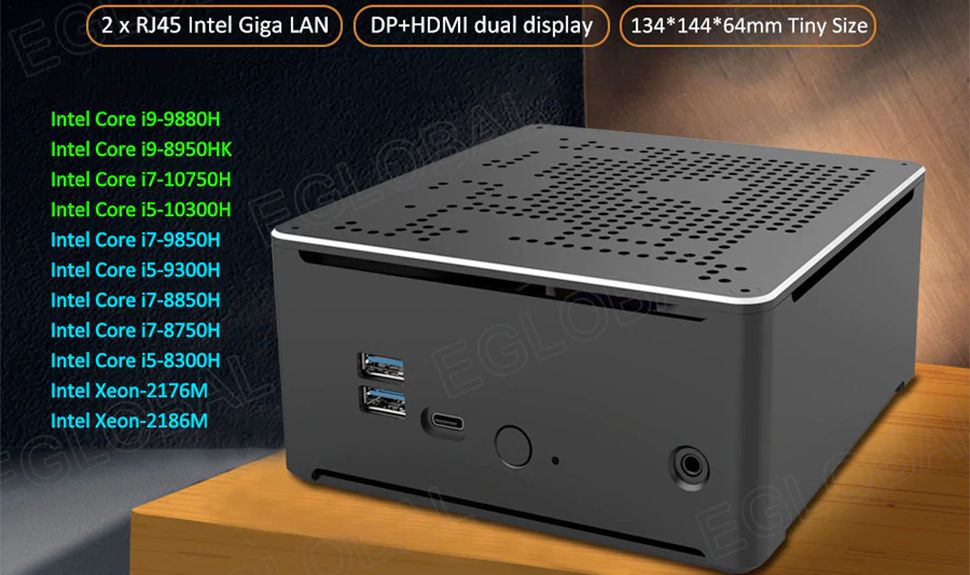 EGlobal, a well-known maker of ultra-compact PCs from China, has released a new system that packs a CPU with up to eight cores, 64GB of memory, plenty of storage and premium connectivity – plus it costs less than $1,000.

The PC is called ‘Moster Mini Gaming PC’ and, as the name implies, is designed for gaming.  Unfortunately, the machine lacks a crucial gaming PC feature: a high-end discrete GPU. It is better suited, then, to those who need a higher-end CPU in an ultra-compact form-factor.

For those who need extreme storage performance, one of the M.2 slots supports Intel Optane Memory caching SSD. Meanwhile, those who need a lot of storage space can install a couple of 4TB M.2 drives and an 8TB 2.5-inch SSD to reach 16TB.

One of the target audiences for a miniature PC without a discrete GPU is photographers who work with Photoshop, Lightroom, and other image editors that can take advantage of multi-core CPUs. These kinds of users usually need plenty of storage and memory, which is something the compact system from EGlobal delivers.

To please those who need plenty of display space, the Moster Mini Gaming PC has two display outputs — a DisplayPort 1.2 and an HDMI 2.0 port — that can drive two 4Kp60 monitors.

As for other connectivity, the UCFF PC supports Wi-Fi 5, optional Bluetooth, two GbE ports (a requirement some enterprises have), six USB Type-A connectors (four USB 3.0, two USB 2.0), a USB 3.1 Gen 2 port (10Gbps), and a headset jack. Unfortunately, the unit does not have a memory card slot, which is certainly a drawback for photographers.

The EGlobal Moster Mini Gaming PC is available at Aliexpress in different configurations, at prices starting at $302 for an entry-level model and ending at $979 for the most advanced SKU featuring the Core i9-9880H, 64GB of memory, and a 1TB SSD.

How Among Us Found Success in Connecting People During a Pandemic