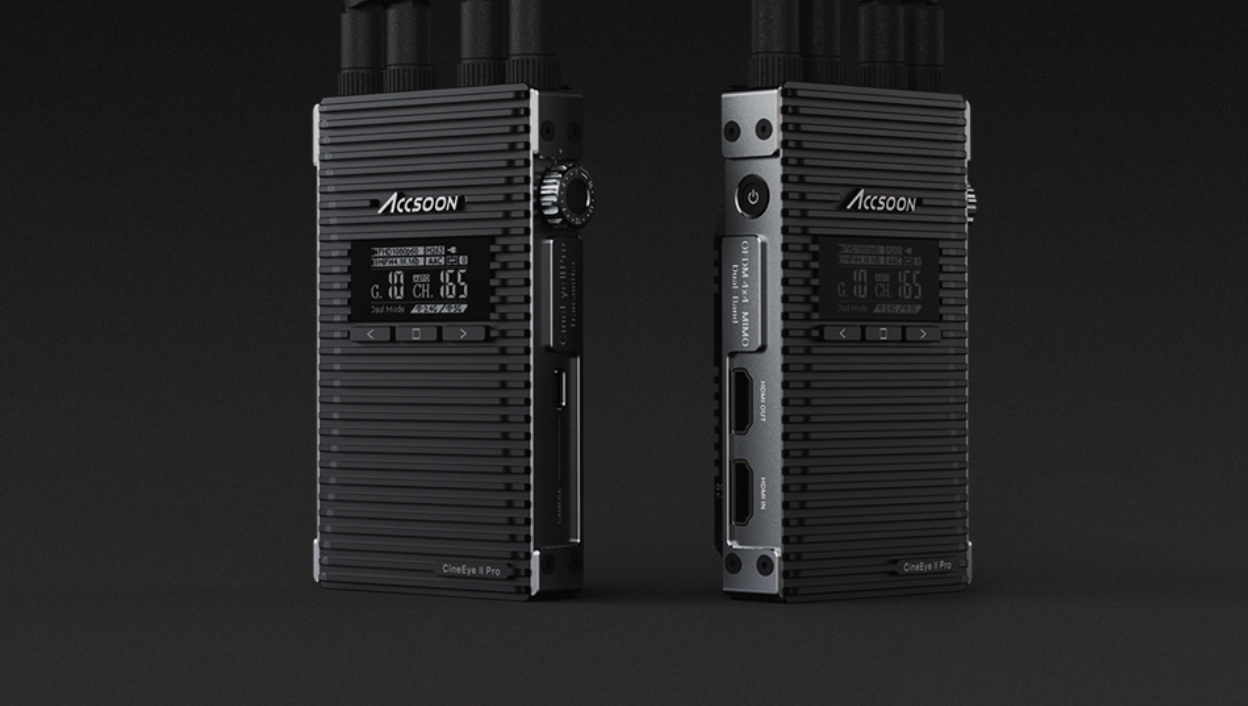 The Accsoon CineEye 2 Pro is a follow up to the CineEye which was announced at NAB 2019. The CineEye 2 Pro builds on the same concept as the original Cine Eye, but it adds extended range, a receiver, camera control. and an HDMI loop-through output.

The original CineEye was a big hit with budget filmmakers as it allowed you to stream an HDMI signal directly to smartphones and tablets through Wi-fi. At $199 USD it was arguably the first budget-friendly way of viewing wireless video on multiple devices. Above you can see our video report from NAB 2019.

Instead of there just being a transmitter, the CineEye 2 Pro consists of both a transmitter and a receiver. This way you can use the system to either transmit to iOS or Android devices, or to the receiver unit which can output an HDMI signal to a monitor, etc.

By adding an LCD screen, an HDMI Output, and a battery plate, Accsoon has had to increase the size quite dramatically.

The CineEye 2 Pro utilizes dual-band transmission technology, which allows it to stream video via 2.4GHz and 5.8GHz Wi-Fi at the same time. The receiver can then intelligently identify interference and combine the two streams to form the complete audio and video stream. According to Accsoon, this greatly improves its stability and anti-interference capabilities.

The CineEye 2 Pro also features automatic channel selection. There are 20 channels to choose from and the transmitter will automatically scan the area and find the least congested channel to transmit on.

One transmitter can stream to up to four iOS or Android devices. You can use a combination of Android or iOS devices, as long as you aren’t using any more than four. The original CineEye was also capable of streaming to four devices at once.

The CineEye 2 Pro uses HEVC compression and it can send video signals up to 1080 60p.

Accsoon claims that the latency on the CineEye 2 Pro is <0.06 seconds (60ms) which is the same as it was for the previous CineEye. In reality, this latency is usually a lot higher than 60ms and you also need to factor in the HDMI delay from the camera you are using. Some cameras have worse latency than others.

HDMI IN & HDMI OUT (Loop Through)

Unlike the original CineEye that only had a single HDMI input, the CineEye 2 Pro has an HDMI input (full-sized) as well as an HDMI output. This allows you to loop a signal through which is important if you are also running a monitor, monitor/recorder, or an EVF.

How is it powered?

The CineEye 2 Pro needs to be powered via a single Sony NP battery. According to the company, a Sony NP-F970 battery can power the unit for up to 20 hours.

You can also choose to power the unit through the DC input (7.4V to 8V) if need be.

The original CineEye runs on a built-in battery that gives you approximately four hours of run time. It was rechargeable via a standard 5V/2A USB charger.

If you are streaming to an iOS or Android device, you can use the Accsoon App to monitor your wireless stream. The App features a ton of functionality and monitoring tools such as focus assist, waveform, false color, zebras, in-app audio and video recording, as well as the ability to load up your own 3D LUTs.

If you are using the Accsoon App for iOS or Android you can also control the start/stop recording of certain cameras. According to Accsoon the CineEye 2 Pro will work with the following cameras:

Now, there is a catch, you need to purchase an optional camera control cable to be able to utilize this functionality.

The Accsoon CineEye 2 Pro will retail for $599 USD. It should be available to purchase very soon.

At this price, it will put it in direct competition with systems from both Hollyland and Vaxis.