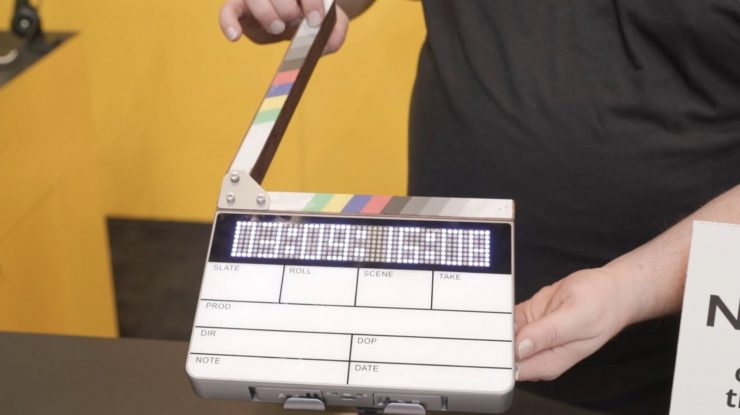 At NAB 2022, Deity has shown a prototype Bluetooth Enabled Smart Slate called the TC-SL1. This is in addition to the Timecode Box that was also being shown.

The Bluetooth Enabled Smart Slate was still very much in prototype form and a lot is likely to change before it actually gets released, but Deity was able to talk to us about what the product does and the features it will have.

The whole concept behind the product was to come up with what will be, the world’s first Bluetooth-enabled slate (unless someone else brings one out first!). Timecode slates have historically been expensive and there are only limited options available. Deity is hoping to bring out a more cost-effective solution so it becomes more accessible to more users.

The Bluetooth Enabled Smart Slate will be compatible with Deity’s Sidus app which also works with the upcoming Timecode Box. This will allow you to sync up the Timecode Box’s and the Timecode slate directly from your smartphone.

The Bluetooth Timecode Slate will also be able to display camera metadata when you do the clap. It is powered via dual Sony NPF-550 batteries which allows you to hot-swap so that the slate won’t turn off.

On the back of the slate, there is a small display showing you your settings. There are also physical controls on the slate itself that allow you to make changes without having to use the app.

Deity told us that they will be selling the TC-SL1 Bluetooth Timecode Slate for $ 1,000 USD and it is scheduled to be available at the end of August.