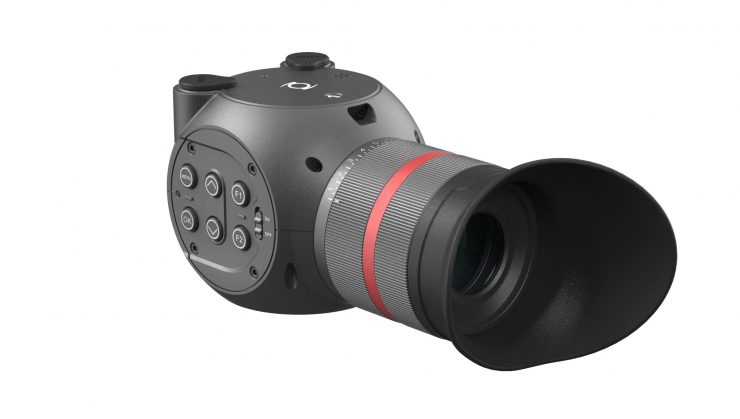 Z Cam has released a new EVF that is very competitively priced at $799 US. EVF’s are generally expensive making the Z Cam model a real potential bargain.

The EVF is fairly compact at 174.5 x 76.3 x 73.3mm. The diopter adds some length to it. It’s powered externally with a lemon connector on the back. No onboard battery is available like the Zacuto Gratical HD has. This might be an issue if you are not using a larger battery with a D-tap output on it.

The shortcut and menu buttons are on the side. They look to have raised lettering on them to make it easy to find the button when operating. On the back is a full-size HDMI and SD inputs as well as USB for loading Luts and firmware updates. It’s good to see that Z Cam included an on/off switch as other EVF’s don’t have one and require the power cable to be disconnected to shut it off. This is not good as if you forget to unplug your camera battery will likely be dead when you resume shooting. It’s the little things that make our lives easier.

A fresh idea on the EVF is the Z Cam has built-in WiFi to monitor the image from the camera with the Z Cam app. I like using my iPhone to control and make changes to settings. Especially the autofocus one-shot feature by tapping the screen on what you want to focus on. I’m not sure if the latency will be high and a bit distracting to use, however, the ability to give others a live view from the EVF is pretty darn cool.

The new Z Cam EVF sits at a very comepative price point especially since it looks like it’s geared towards professionals with the SDI and powering configuration. Below is a comparison of other popular EVF options on the market.

This is a pre-release and is available for preorder from CVP. No US retailers yet. At this time and no release date has been announced. Again, with the entry price of $799 it just might be a go-to EVF for the budget-minded filmmaker.

Like what we do and want to support Newsshooter? Consider becoming a Patreon supporter and help us to continue being the best source of news and reviews for professional tools for the independent filmmaker.


Erik is an 18 time Emmy award-winning DP, with over 20 years experience in photojournalism, working in newsrooms all over the USA.

The last decade has seen Erik migrate into broadcast television and filmmaking, where he has discovered a passion for visual storytelling and production.

Additionally, Erik is an outstanding educator, teaching filmmaking via courses on Linkedin Learning and Lynda.com.

AI is on the verge of mastering the creative arts