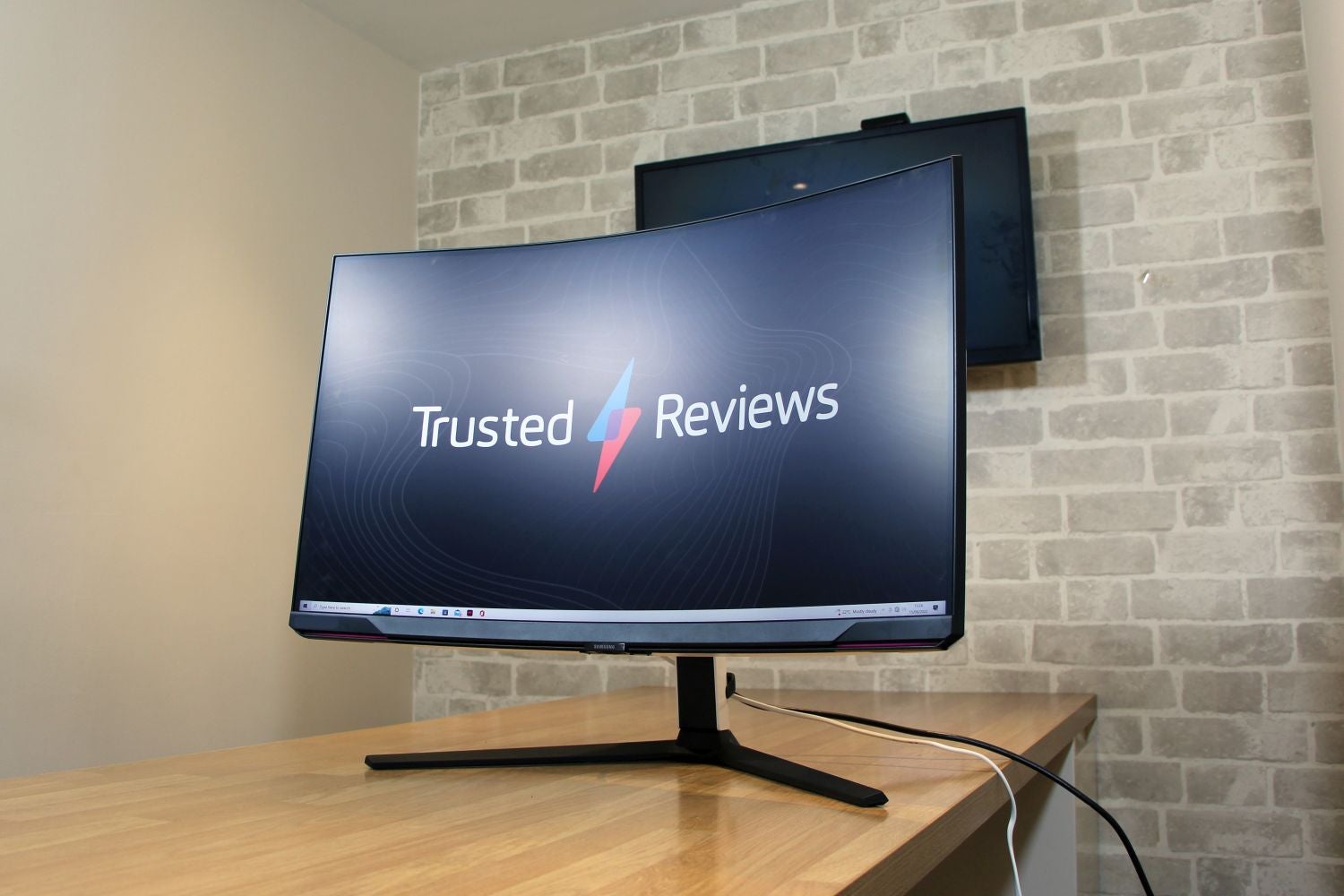 The Samsung Odyssey Neo G8 is one of the best gaming displays on the planet thanks to its incredible contrast, top-notch colours, stellar refresh rate and 4K resolution. It has its foibles and flaws, and you’ll need a hefty graphics card – but don’t let that put you off.

The Samsung Odyssey Neo G8 (G85NB) is the world’s first gaming monitor with a 240Hz refresh rate and 4K resolution. This gives it tempting specs that should grab any gamer’s attention.

It’s the kind of screen that doesn’t compromise, and elsewhere this new Samsung delivers Quantum Mini LEDs and a 1000R curve.

There’s plenty to like, but the Samsung Odyssey Neo G8 isn’t cheap: you’ll have to spend £1299 / $1499 / €1499, if you’d like to place the G8 on your desk. This isn’t surprising when this display clearly takes aim at the best gaming monitors on the market.

The 32-inch diagonal is high enough to be absorbing without becoming overwhelming, which can easily happen on large displays such as the G9 or Samsung’s forthcoming Ark. The 4K resolution has a density level of 137.68ppi, which is excellent – it means the G8 delivers pin-sharp imagery.

That resolution ensures games look detailed and that there’s plenty of space for apps, and the 16:9 aspect ratio works well for media and every gaming genre. That said, you should still consider the wider G9 or Alienware panels, if you primarily play racing games.

The G8 uses a 1000R curve, which matches the rest of the Odyssey range. I’m always happy to see a 1000R curve – the shape matches the curvature of the human eye, which helps the G8 deliver consistent imagery, plus gaming is more immersive than on panels with gentler curves or flat displays. The curve is unobtrusive outside of games, too, although people who work in colour-sensitive applications should still opt for flat panels.

Beneath all of this you’ll find Quantum Mini LEDs. They’re Samsung’s version of the mini-LED hardware that’s popular in the TV world. These tiny LEDs can turn off independently and run at different brightness levels. There are 1196 LEDs in the G8, allowing Samsung to create complex and varied backlighting patterns that easily outstrip conventional, blunt-force backlight technologies.

Mini LEDs don’t quite offer the same contrast and depth as OLED panels as a result of the necessary addition of an LCD layer, but this is as close as you’ll get on a gaming screen at 240Hz right now.

The underlying panel is a VA screen with 10-bit colour and a 1ms response time, and the rest of the G8’s specifications impress. AMD FreeSync Premium Pro bolsters the 240Hz refresh rate, so it works on Nvidia and AMD graphics cards, and you’ll only want to look towards 360Hz panels such as the 1080p Asus ROG Swift PG259QNR if you’re a top-tier eSports player.

Bear in mind that you’ll need a particularly beefy graphics card to use the Neo G8 properly, though. An Nvidia GeForce RTX 3080 Ti or one of the RTX 3090 cards will be required to deploy 4K games at 240Hz – or one of AMD’s equivalents. That’s an expensive and potentially scarce investment.

Of course, the graphics situation does depend on the games you want to play. The latest eSports titles will run at 4K and 240Hz on a broader range of GPUs right now, but you’ll also find that most single-player, top-tier games just won’t run smoothly at 4K and 240Hz, no matter the graphics card – unless you make settings compromises. That said, the GPU market will certainly get to that point. So, if you’re willing to spend four figures on a monitor and a graphics card, you’ll probably be keeping the hardware for several years.

Physically, the Neo G8 shares its design language with the G9, so expect a sandblasted metal base and glossy white plastic. It offers plenty of adjustment options, too, with 120mm of height adjustment, tilt and swivel movement, portrait mode functionality, and 100mm VESA mount support.

At the rear you’ll find two HDMI 2.1 ports, a DisplayPort 1.4 connection and two USB 3.2 Gen 1 ports – but they all face downwards, and there’s no USB-C connectivity. The G8 doesn’t have speakers or a headphone hook, but it does have a basic cable-routing hole.

Those aren’t the G8’s only physical issues. While the rear and base feel rock-solid, the display wobbles if it’s nudged. The RGB LEDs aren’t much cop, either: Samsung has added lighting to the front, alongside the ring of rear lighting, and all of the lights can now synchronise with your gameplay. Sadly, however, the lights aren’t bright enough, and you can still only choose from 52 shades rather than the entire RGB gamut.

Don’t expect tool-free building here, either. The Neo G8 is fiddly to construct, and the excellent on-screen display is hindered by soft, shallow and irritating D-pad navigation. Note that the panel weighs 8.9kg and it’s 300mm deep from front to back, so it isn’t exactly small.

These minor issues won’t be a problem once you have the Neo G8 positioned where you want, but I’d prefer if they had been considered on a future-proofed, expensive panel such as this.

Out of the box the G8’s brightness level of 192 nits was paired with a brilliant black point of 0.02 nits – an instant demonstration of those Quantum Mini LEDs. The resulting contrast ratio of 9600:1 is sensational, and far beyond a conventional VA or IPS display. The Neo G8 delivers punchy, vibrant images with incredible depth that isn’t far short of the best OLED panels – games look incredible. Those Quantum Mini LEDs deliver superb uniformity, too: the brightness only varied by 7.7%.

The G8’s Delta E of 2.17 is good, ensuring accurate colours, and the colour temperature of 6065K is reasonable – a bit warm, but not wayward enough to hinder games.

The Neo rendered the sRGB colour gamut with 99.5% coverage and 129.8% volume, and it returned DCI-P3 results of 91.2% and 92%. The G8’s sRGB results are brilliant, and mean that the panel will deliver vibrancy in every shade needed by mainstream games, and its DCI-P3 figures are just good enough to enable successful HDR gaming.

Indeed, the G8 impressed in HDR titles. Its consistent peak brightness level of 1411 nits paired with a 0.02-nit black point for a monster 70,550:1 contrast ratio, which really shows off what those Quantum Mini LEDs are capable of. Combine the huge brightness and contrast with the nuance provided by those LEDs and you have a display that delivers great performance in HDR games.

Samsung’s latest does a good job with motion, too. The G8’s 240Hz performance is fast, crisp and smooth, with only minor ghosting visible in darker areas. It’s better than most 240Hz screens in this regard and will serve most gamers well.

Beyond that minor ghosting, you’ll see some small bloom around light objects on dark backgrounds in HDR mode, and the panel didn’t quite reach Samsung’s claimed HDR burst brightness of 2000 nits – but none of that will seriously hinder gaming. As usual, the only screen mode worth using is the sRGB option, because the genre-specific modes just make image quality worse.

In short, the Neo G8 delivers sensational image quality alongside its high-end specification – when it comes to 16:9 displays, nothing else currently competes. Its HDR ability outstrips the Neo G9, and the G8 matches its larger stablemate in other benchmarks. Not surprisingly, the Neo G8 consistently beats the Alienware in HDR image quality tests and contrast performance, although both perform well with SDR colours.

No other gaming display offers this mix of specification. If you spend this amount elsewhere, you’ll find 16:9 panels with feature compromises, or widescreens that are better for racing games but less impressive in other genres. I’d recommend the Neo G9 for racing because it’s close to the G8 in terms of image quality – sure, the Alienware is cheaper, but it’s poorer than both.

The Neo G8 isn’t perfect as a result of its physical issues, and you’ll certainly have to ensure you have a graphics card that’s capable of driving this display – or the budget for one when new GPUs emerge. But if you want incredible SDR and HDR image quality and a specification that will last for years, the Neo G8 is the display to buy.

You want the best 16:9 display going, and you’ve got a GPU to match There’s simply no other 16:9 display that can match the Samsung’s quality right now, although you’ll need a powerful graphics card to get the most out of the G8.

You’re on a budget, or you’re an eSports professional The Neo G8 is expensive – save your cash and consider a different model if you won’t use all of its features. And if you’re a top-notch esports player, buy a 360Hz screen instead.

It’s expensive, not without flaws, and demands a powerful GPU to work properly. However, the Samsung Odyssey Neo G8 serves up class-leading contrast, superb colours and an immersive, high-resolution display, making it one of the best gaming monitors around right now.

We use every monitor we test for at least a week. During that time, we’ll check it for ease of use and put it through its paces by using it for both everyday tasks and more specialist, colour-sensitive work.

We also check its colours and image quality with a colorimeter to test its coverage and the display’s quality.

We use as our main monitor for at least a week.

We used a colorimeter to get benchmark results.

Used our own expert judgement for image quality

How long is the warranty included with the Samsung Odyssey Neo G8?

The G8 is protected by a one-year, return-to-base warranty.

Are the colours good enough for photography and design work?

The G8 delivers the accuracy and gamut to handle mainstream art and design work, but serious pros will want to look elsewhere for a screen that offers broader DCI-P3 and Adobe RGB gamut coverage figures.

You can see a detailed breakdown of all the test data we collected reviewing the G8 and how it performed against its closest rivals in the table below.

You can check the G8’s specs and how they compare to rival products in the table below.

TrustedReviews’ holds the fact that global warming is not a myth as a core value and will continuously endeavor to help protect our planet from harm in its business practices.

As part of this mission, whenever we review a product we send the company a series of questions to help us gauge and make transparent the impact the device has on the environment.

We currently haven’t received answers to the questions on this product, but will update this page the moment we do. You can see a detailed breakdown of the questions we ask and why in our sustainability info page.

The number of times the screen refreshes itself per second.

Organic Light Emitting Diode is panel technology that allows each individual pixel to produce light rather than relying on a backlight. This enables the screen to accurately display blacks by turning off the pixel, resulting in improved contrast compared to conventional LCD panels.